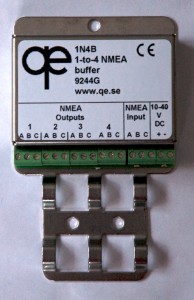 The sub-title of the NMEA standard is “single talker, multiple listener”. In a perfects world, it would in most cases be OK to add an extra NMEA listener to an existing installation, since only opto-isolated inputs compliant with the 2 V 2 mA requirement of the standard are permitted.

But reality is not always that simple. Anyone that had to go into a bridge console on a ship knows that anything can be expected and that it is in many cases impossible to know what is already connected to a NMEA ouput. This situation is made further complicated by the added need for 38400 b/s high speed connections, mainly from AIS and Gyro/autopilot. In most cases the standard 2 V 2 mA opt coupler inputs works fine for these channels also, but to be formally compliant a sensitive 200 mV input stage, requiring a separate and isolated power supply is needed.

To make life even more complicated for the service/installation engineer, there are various non-standard connections “out there”, where for instance RS232 inputs are more common than the DNV or BSH inspectors would expect. In order to make the 1N4B buffer even better, we have also included output drivers galvanically isolated from the power supply of the unit, meaning that the ship’s electrician will still be happy if You are forced to side ground one of the outputs!

With a compact 1N4B in the service trunk, it is simple to throw this into the connection to ensure that the added load of extra VDR/S-VDR or ECDIS inputs does not cause problems.

The 1N4B manual is available here and the 1N4B BSH type approval here.