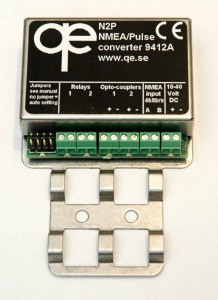 The N2P is capable of generating the old-fashioned but widely used 200 pulses/nautical miles data for radars and other equipment requiring speed input. Speed can be derived not only from VBW or VHW log speed NMEA messages, but also from GPS SOG.

A jumper field is available to select which speed is used for pulse conversion, but in most cases the unit can be operated at the default setting where it will use the best available speed, giving priority to log speed data if available.

This means that the N2P can be used in installations where the speed log has ceased to operated properly, but where it is essential to get speed data for radar or for any other system requiring ship’s speed.